Disclosure: This page may contain affiliate links which means if you click and buy,
we may receive a small commission. See full Disclosure for details.

Summer’s here so why not have some fun with Solar Dyeing or Sun Dyeing your Wool Yarn? 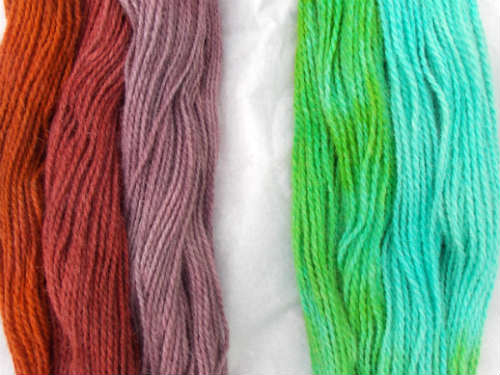 Did you see my Kool-Aid Dyeing Tutorial where I created a multi colored yarn with various shades of Kool-Aid? Well, I’ve been playing around with over-dyeing different colors to see what comes out. And, since it’s nice and hot outside, why not use the sun to set the dye? I did 2 separate skeins with different colors. I hope it’s not too confusing!

So, here are the 2 experiments:

(This post contains affiliate links, which means that if you click on one of the product links, Fiberartsy may receive a small commission)

Fill a bowl with warm water and add the yarn, gently pushing the skeins down to saturate (don’t move it around). Let it soak for about 20 minutes. No vinegar needed since the Kool-Aid contains plenty of citric acid.

In the meantime, add warm water to your Canning Jars

Remove yarn from the bowl and squeeze out the excess water. 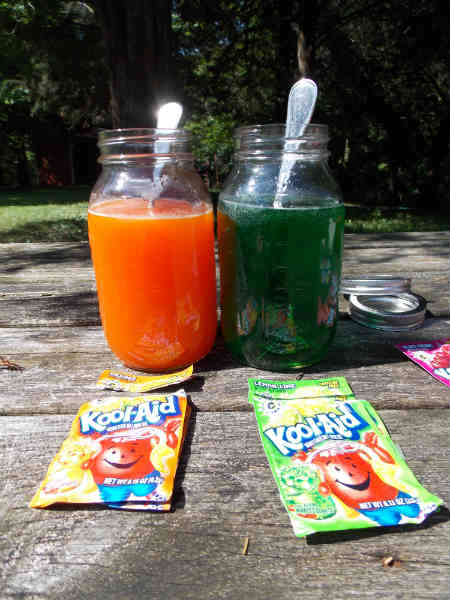 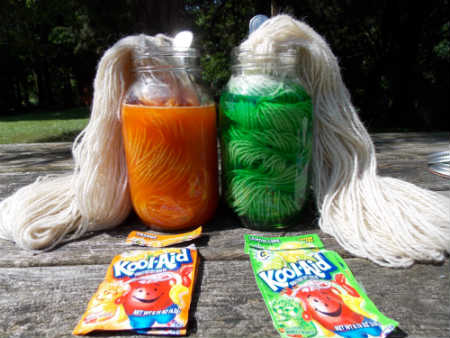 Loosely place the lid on the jar (to keep the heat in) and set it in the sun. It wasn’t quite hot enough this day, so I placed my jars in an old, black roasting pan to try and increase the heat. (Note – this can also be done inside on top of the stove)

The dye has set when the water is clear. It took about 30 minutes.

Carefully remove each skein of yarn and squeeze out the excess liquid. Set aside. 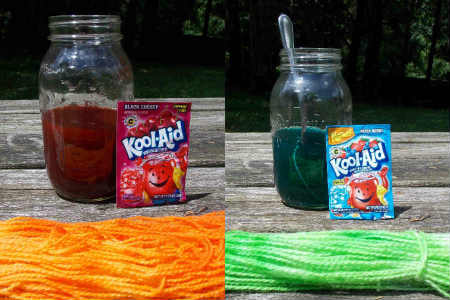 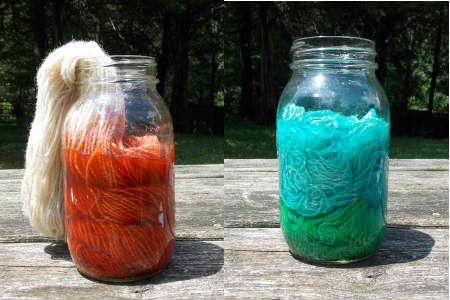 Once again, heat set the dye as with the first color (above), then, carefully remove each skein of yarn and squeeze out the excess liquid. Set aside.

Heat set as before.

Once the dye has set, rinse your yarn in cool water and hang to dry. It’s fun to see the colors change with the different over-dyes. 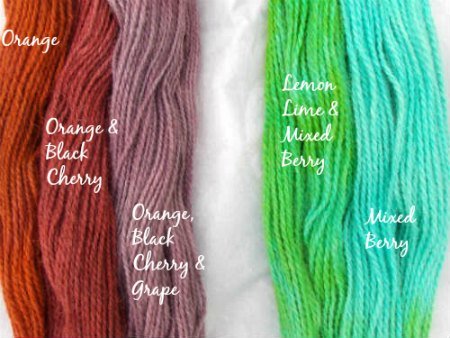 Feel free to have a look around … in addition to my fiber art, I also share knitting and crochet patterns, general home crafts, DIY, beauty recipes, and much more. Oh, and if you are an Indie Knit and Crochet Pattern Designer, please SUBMIT YOUR FREE PATTERNS. Enjoy! 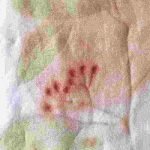 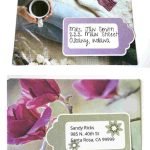 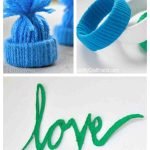 As an Amazon Associate, this site earns from qualifying purchases by linking to Amazon.com and affiliated sites.

Affiliate Advertisements: This site participates in various Affiliate Programs. This simply means that if you click through an affiliate link and buy a product, we may get a small commission, at absolutely no extra cost to you.